The Ranking Member on Parliament’s Foreign Affairs committee is set for court for what he describes as the failure of the National Security Minister to furnish Parliament with yearly reports on Ghana’s intelligence agencies.

In a letter to the state’s chief attorney, Sam Okudzeto Ablakwa noted: “the said minister after assumption of office has repeatedly omitted or refused to honour his obligations to Parliament.”

Albert Kan Dapaah is being accused of dereliction of duty

Mr. Ablakwa said his calls on the Speaker of Parliament to order the Minister to comply with the law and furnish parliament with the reports have produced no results.

“Similarly, the Ranking Member on Defense and Interior committee…made several calls on the floor of parliament for the said Minister to submit the reports without any positive response,” the letter added.

The North Tongu Parliamentarian said he has resolved to go to court “after the stipulated one month notice has elapsed” for an order to compel the Minister to respect parliament and furnish the House with the reports.

See his notice below 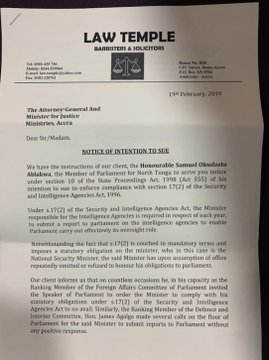 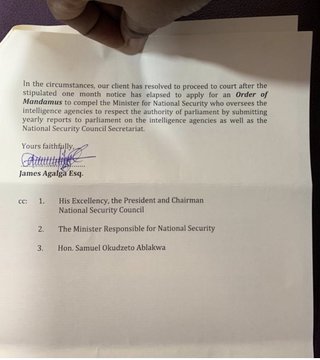