The National Road Safety Commission wants a change on its law to deal with indiscipline following a devastating carnage on an important highway which left at least 62 dead.

Chief Executive of the Commission Mrs May Obiri-Yeboah explained all its current powers remain persuasive as it was set up to carry out road safety education and advocacy.

“If we don’t have the teeth to bite then we will continue with the education,” she told host of the Joy FM Super Morning Show Monday.

That teeth is a legal transition from a Commission to an Authority, a status that comes with greater autonomy and its attendant bigger budgets.

“If we were given an authority status….we could ensure that …we can enforce the standards of road safety,” Mrs May Obiri-Yeboah said.

For three years straight since 2016, road fatalities have increased from 2,084 to 2,341, according to the Motor Transpor and Traffic Directorate. The MTTD has reported an average of 2,059 death by road accidents since 2011.

But the latest on the Kintampo-Techiman highway in the North East region last week Friday has triggered another national hue and cry over lackadaisical attitudes of road users and state regulators.

The National Road Safety Commission maintains that enforcing discipline on the roads is the work of the MTTD within the Ghana Police Service.

What the Commission does is to enlist the support and cooperation of relevant stakeholders such as the media, the police and the DVLA.

The Commission, she said, got 6.5m cedis, its entire requested budget for advocacy, to work with these stakeholders.

The Commission has also recruited some 500 youths through NABCO. These youths who are under training, will be stationed at toll booths, roads, market places and transport terminals to do sensitisation.

Mrs May Obiri-Yeboah said the Commission has held meetings with about a 100 journalists and editors to arm them with information on road safety and also appreciate the work, strengths and weaknesses of the Commission.

It has engaged the DVLA to discuss training for drivers in public transport. To support the MTTD with 4,000 reflective jackets, describing the gesture as the commission’s “widow’s mite.”

The NRSC Chief Executive said for the efforts of road safety regulators, there has been a drop in child, passenger and pedestrian deaths.” She claimed these tragedies have come down “drastically” since 2013.

The problem with this law is that it no longer exists in its original form. A watered down version of it, the Road Traffic (Amendment) Act, 2008 (Act 761), reduced fines by 90%. 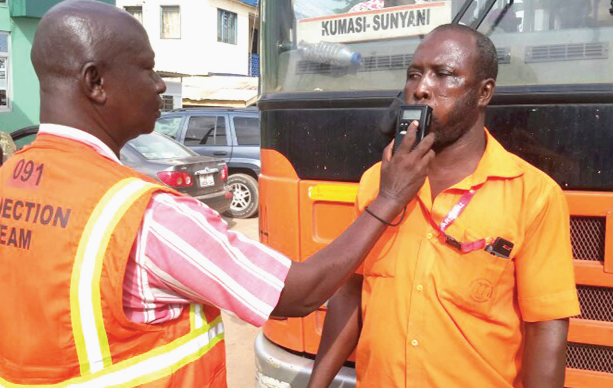 In effect, a driver found to have prohibitive level of alcohol in the breath paid 6,000 cedis if he was caught before the law was amended.

“We would never have supported the reduction of penalties,” Mrs Obiri-Yeboah said after indicating that the change in law could have contributed to the high levels of impunity on the road.

What the NRSC has been part of is the move to grant it an Authority status. That has been approved by Cabinet, she revealed.

The new designation is contained in a legislation drafted by the Attorney-General’s Department.

The Transport minister, she said, is expected to go to Parliament and lay the bill before Parliament in what is believed will help curb the tragedy of having to lay 62 in mass graves.