The presidential and parliamentary polls will now be held on 23 February.

In a press conference on Saturday, the chairman of the Independent National Electoral Commission (Inec), Mahmood Yakubu, said the decision to delay had “nothing to do with political influence”.

The foreign observers urged Inec to adhere to its new election date and provide regular updates to the public.

How have the political parties reacted?

The two main groups, the ruling All Progressives Congress (APC) and the People’s Democratic Party (PDP), both condemned the move and accused each other of trying to manipulate the vote.

President Buhari, of the APC party, urged Nigerians to “refrain from civil disorder and remain peaceful, patriotic and united to ensure that no force or conspiracy derail our democratic development”. 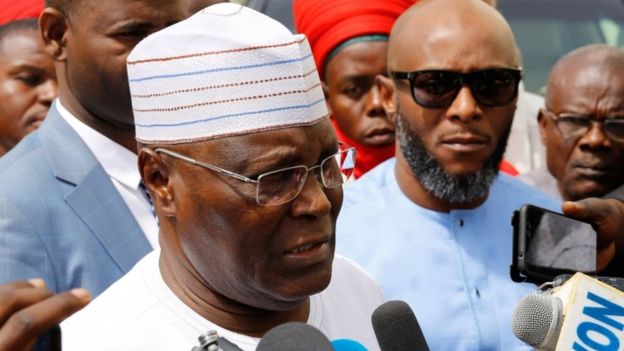 Atiku Abubakar was disappointed but appealed for patience

His main rival, Atiku Abubakar, called for calm, saying: “I’m appealing to Nigerians to please come out and vote and I’m asking them to be patient about it.”

In a tweet he said the administration was trying to disenfranchise the electorate.

The chairman of the PDP, Uche Secondu, said the delay was “dangerous to our democracy”, accusing Mr Buhari of trying to “cling on to power even when it’s obvious to him that Nigerians want him out”.

In many cases they reacted with disappointment, frustration and anger.

In the northern town of Daura, Musa Abubakar, who had travelled 550km (342 miles) from Abuja to take part in the election, told the BBC that he “couldn’t believe” what had happened.

Hajiya Sa’adatu said she was “greatly disappointed” to learn of the delay when she came out to cast her vote in the northern city of Kano. 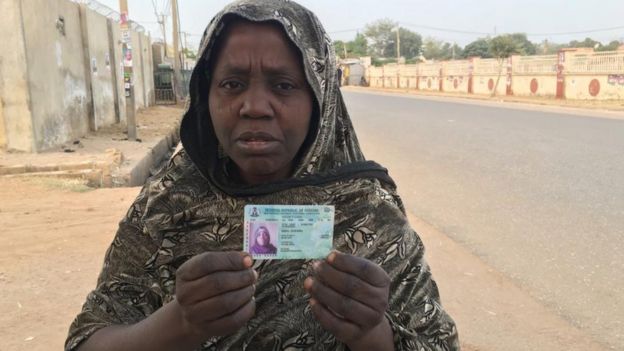 “We spent all night without sleeping hoping to vote today,” Auwolu Usman, a voter in Maiduguri, told Reuters.

Oyi Adamezie, in the city of Warri, told Agence France-Presse: “I see this postponement of the election as a ploy to rig.”

Yusuf Ibrahim, in Abuja, told Associated Press: “I came all the way from my home to cast my vote this morning… I am not happy, I’m very, very angry.”

Election officials bore the brunt of the anger:

So why was voting postponed?

He said the delay was down to problems with the transportation of electoral materials – ballot papers and results sheets – to some parts of the country.

He had earlier said the decision was made because of a “determination to conduct free, fair and credible elections”.

In the past two weeks several Inec offices have been set alight, with thousands of electronic smart card readers and voter cards destroyed.

Nigeria has seen violence in the run-up to the elections and on Saturday 11 people were killed in an attack by Boko Haram militants south of Maiduguri.

Suspicions of skulduggery, rampant rumour-mongering – and a pre-disposition to suspect the worst based on past experience – are hallmarks of Nigeria’s election season. It is not surprising that some voters expressed their fears that a fix was being organised.

The election commission chairman has denied this, citing bad weather and the challenge of getting the necessary resources to the right areas. But as recently as last Wednesday he was assuring Nigerians that the commission was ready for the elections.

Recriminations began soon after the announcement. The opposition claimed there was a government plan to create a low turnout that would harm its candidate.

But there have been no calls for street protests from the opposition, which is prepared to wait for the polls next Saturday. Importantly, the two main contenders have appealed to their supporters to remain calm.

The presidential and parliamentary votes have been rescheduled for Saturday 23 February.

The contest between the two main presidential contenders is expected to be tight.

Presidential elections in 2011 and 2015 were also delayed.

Whoever wins will have to address power shortages, corruption, security problems and a sluggish economy.

There are 73 registered candidates in the presidential election, but campaigning has been dominated by President Buhari, 76, and Atiku Abubakar, 72.

Mr Buhari says he has built a strong foundation for prosperity, but his rival says Nigeria is not functioning.

Both men are from the mainly Muslim north of the country. While both are in their 70s, more than half of Nigeria’s 84 million registered voters are under 35.