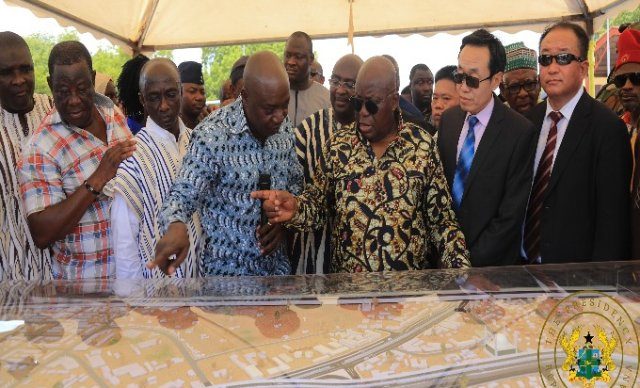 President Nana Akufo-Addo, has launched the $2 billion Ghana – SinoHydro Master Project Support Agreement (MPSA), and also cut the sod for the construction of the Tamale Interchange.

He said, Ghana through a barter arrangement, will have $2 billion worth of priority infrastructure projects delivered across the country, in exchange for the delivery of Ghanaian manufactured aluminium products to Sinohydro.

The barter arrangement has, thus, necessitated the establishment of the Ghana Integrated Aluminium Development Corporation, a statutory public corporation, to oversee the development of the exploitation of the full value chain of the country’s bauxite resources.

This, the President explained, is to guarantee that Ghana has a vibrant aluminium industry, “and ensure that we live up to our end of the barter transaction. This innovative arrangement, the first of its kind on the continent, is not going to add to our country’s total debt stock.”

The President made this known Wednesday at the Jubilee Park, in Tamale, in the Northern Region.

Each of the 16 regions is set to benefit from the Sinohydro arrangement, with hospital projects, extension of electricity to rural communities, and construction of court and residential buildings for the Judicial Service, landfill sites and industrial parks, set to be undertaken.

The projects under Phase 1, which have been approved by Parliament, are as follows:

These projects, President Akufo-Addo explained, are to be implemented on Engineering, Procurement and Construction (EPC) basis, and will be completed within 30 calendar months after commencement.

“Government is also ensuring that, in accordance with the local content law, a minimum of 30% of works will be undertaken by Ghanaian contractors, and supervised by Ghanaian consultants.

“Thousands and thousands of jobs will be created for our youth, our country will be opened up for sustained growth and development, and, thereby, help put Ghana onto the path of progress and prosperity,” he added.

The President charged the Roads and Highways Ministry and its implementing agencies to ensure that adequate and proper supervision is given to all the works being undertaken, guarantee that the country gets value for money, and ensure strict adherence to completion dates.

Whilst urging contractors to be mindful of the environmental protection laws of the country, and institute measures to mitigate against the negative health impacts the projects may have on citizens, President Akufo-Addo stressed that “I will not countenance any delays in the execution and delivery of the various infrastructural projects. Thirty months is 30 months.”

Under Phase 2 of the Sinohydro deal, which would come on stream after approval by Parliament, an additional 1,300 kilometres of roads, 3 interchanges, and 69 steel bridges will be constructed, at an estimated $850 million.