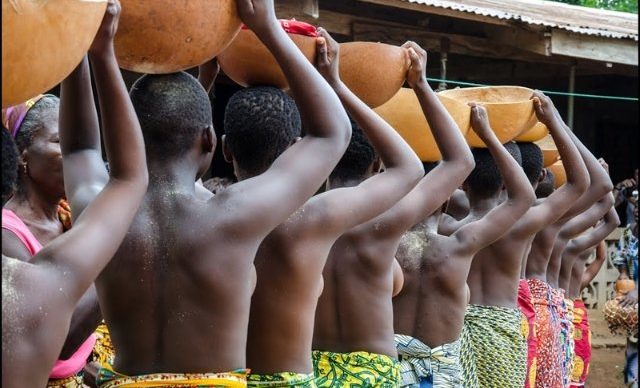 Queen mothers in Afigya Kwabre, a district in the Ashanti Region, have resolved to re-introduce the age-old puberty rite popularly known as ‘bragoro’ to fight teenage pregnancy.

They are collaborating with the district assembly and Ghana Education Service (GES) to end what they call increasing promiscuous lifestyles among girls in their respective communities.

Available statistics show that 9,100 adolescents got pregnant in the Ashanti Region in the first half of 2017 alone.

International NGO, Marie Stopes, says they are part of some 57,000 teenage pregnancies recorded nationwide over the period.

The worrying trend is receiving attention from the Queen Mothers Association of Afigya Kwabre which finds re-introduction of puberty rites as an option addresses it.

“We don’t think there will be so much promiscuity in our society because our young girls would have stayed chaste before they will go through puberty rite before they get married through the proper way.”

The queen mothers are also embarking on an advocacy outreach programme with the aim to check drug addiction, and other vices the young girls find themselves in.

A fundraising ceremony is scheduled to buy a bus to aid their movement to senior high schools and colleges in the district to educate and encourage the young ones to be chaste and stay in schools to become great future leaders.

“We are asking all stakeholders to join us and support us get the bus for the queen mothers’ association so we can use it for our advocacy program,” Obaapa Adwoa Nkyaa said.

For her, the initiative will focus more on sex education; the dos and don’ts that will guide the young girl child to take care of herself.

She believes that the exercise will reduce sexually transmitted diseases (STIs) in these communities and the schools which will be major agents to push the campaign.

District Chief Executive, Christian Adu Poku, reveals the assembly has established a teenage girls club for sensitisation. This according to him will augment the initiative of the queen mothers to encourage chaste lifestyles and avoid teenage pregnancies.

Meanwhile, authorities say they will explore other preventive measures to augment the puberty rites to be launched from 21st to 24th of February, 2019.

The program will include, clean-up exercises, traditional cloth exhibition, food fair and other activities.

The Afigya Kwabre Queen Mothers’ Association was inaugurated in 2010 with the idea of uniting queen mothers.

All queen mothers’ from both the Afigya and Kwabre areas of the Ashanti region have come together to foster a common good for their people.