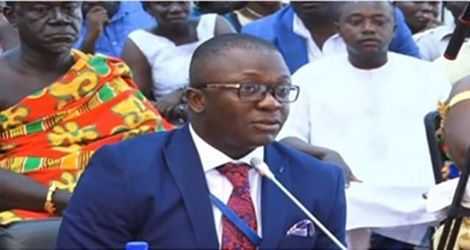 Dr. Angela Dwamena-Aboagye, Executive Director for the Ark Foundation, Ghana has questioned the rationale behind having a Minister in charge of National Security when there are already existing structures by the constitution to deal effectively with national security issues vis-à-vis the National Security Minister.

The National Security Council which constitutes the President, Vice-President, defense, interior ministers, IGP among others is mandated to coordinate policy on national security issues and advise on matters related to national security.

Speaking on Joynews’ Newsfile program Saturday, Dr. Dwamena-Aboagye called for a clear outline of the roles and responsibilities of Minister in State in charge of National Security, Bryan Acheampong. According to her, the current structure of the National security apparatus makes it very ineffective such that, it is difficult to determine who is in charge and in which ever capacity at any given point.

Contradictions emerging from the first two days of the Commission of Inquiry’s sitting she says, is enough evidence that there are huge gaps in the coordination system at the National Security level.

A clear outline of the difference in duties and responsibilities of the Minister of State in Charge of Security and National Security Minister, Albert Kan Dapaah, she believes, will put a lot of things in perspective and better help in the coordination process subsequently.

“The issue of who is leading, who is in charge, who coordinated what, is still outstanding”.

Dr. Dwamena-Aboagye was confident that recommendations from the Emile Short Commission of Inquiry in that regard will help settle a lot of confusion.

“Some of the things the commission should be able to do to for us is to clearly lay down recommendations that will inure to the benefit of Ghanaians in terms of coordination. Who coordinates what especially in an important matter like security, obviously there are huge gaps in coordination”, she stated.

Her comments come after two days of sitting of the Justice Emile Short-led Commission tasked by the president to investigate the violence that almost marred the Ayawaso West Wuogon by-elections on January 31.

The police and National Security officials seem to contradict each other in their televised account to the Commission on the disturbances during the polls.

While National Security chiefs who appeared before the same Commission on Thursday claimed that the Police SWAT vehicles used belonged to the Service and the masked men who occupied them were police officers, George Alex Mensah in his account on Friday said otherwise.

He said the Police had no knowledge of the masked men and the vehicle they used.

That same day, the East Legon police commander, in whose jurisdiction the by-election and its related violence occurred, also said although he completely left out of the entire by-election planning process, he was aware of a task force from National Security were deployed to monitor the elections