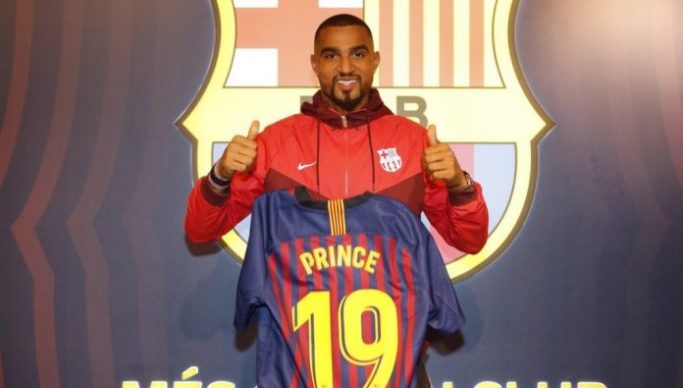 Barcelona’s new signing Kevin-Prince Boateng accepts he has joined the club to be a back-up after the 31-year-old was officially unveiled at the Camp Nou on Tuesday.

Boateng has moved to Barca from Italian side Sassuolo on a six-month loan deal worth an initial one million euros, with the option to buy for eight million euros in the summer.

He will provide cover up front for Luis Suarez and Lionel Messi after Munir El Haddadi was sold to Sevilla earlier this month.

Ernesto Valverde’s side have already played 31 games this season and, as well as leading the title race in La Liga, are into the latter stages of the Champions League and Copa del Rey.

“I have not talked to the coach,” Boateng said at a press conference. “But I know I have not come to play in the starting line-up because there are incredible players in this team. I’m here because of my experience and to help.”

Boateng, who turns 32 in March, has represented 10 different clubs including AC Milan, Borussia Dortmund, Tottenham and Portsmouth. He also has experience of La Liga, having spent a season at La Palmas in 2016-17.

Deployed more as an attacking midfielder earlier in his career, Boateng believes he is now best suited to the role of striker.

“At my age, the role of number nine is perfect for me,” he said. “I think it’s a plus that I can play in different positions but I feel very comfortable as a number nine.”

Boateng added: “I’m here to play well and to try to stay for more years here. That’s my goal.”

Alongside Boateng was Barcelona’s sporting director Eric Abidal, who was asked about the club’s pursuit of Ajax midfielder Frenkie de Jong.

The 21-year-old is considered one of the most talented youngsters in Europe.

“This question has to be asked to the player, he knows there is interest from many clubs and he will make his decision,” Abidal said. “We can only wait, like everyone else.”

Abidal said departures are also possible this month, with Malcom and Denis Suarez among those linked with moves away.

“We are happy with the squad but there is always a chance,” Abidal said. “Players who are not playing very much can stay or leave, all scenarios will be evaluated.”