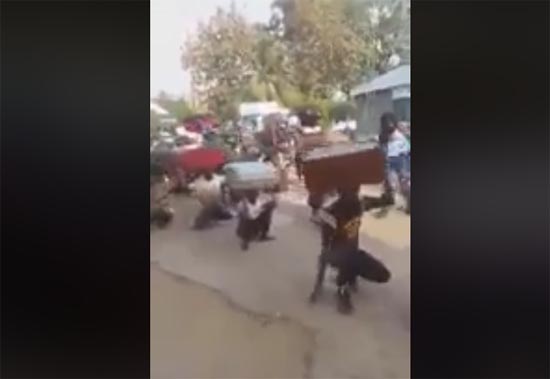 The Volta Regional Police Command has taken over investigations into the circumstances that led to the death of a senior cadet recruit whilst on training at the Customs and Excise Preventive Service (CEPS) Academy at Kpetoe, in the Agotime Ziope area of the Volta region on March 31, 2019.

The deceased, a 35-year-old George Annor, was said to be part of senior cadets who had reported at the academy on March 31, 2019 for training.

In a video [below] circulated on social media, some recruits are seen undergoing arrival formalities [drills] at the training school, where they are seen moving on a bended knee carrying their luggage.

The drill for the recruits was said to have gone bad and allegedly resulted in five persons collapsing and led to the death of George Annor.

The deceased is believed to be part of the said recruits captured in the video.

The Volta Regional Commander, DCOP Edward Oduro Kwarteng has confirmed the incident to Graphic Online and explained that investigations were yet to conclude that the deceased was part of the recruits seen in the viral video undergoing arrival training.

According to the police commander, an autopsy report by a pathologist, Dr.Agyemang Bediako from the 37 Military Hospital has revealed that the deceased died as a result of ‘acute ventricular failure’.

The deceased he said has since been released to the family for burial.

DCOP Kwarteng explained that on March 31, 2019, the senior cadets including the deceased arrived at the academy and in the process of arrival exercise to get them initiated into the academy, the deceased collapsed and was rushed to Kpetoe Health Centre where he was given first aid and later referred to the Volta Regional Hospital in Ho.

He was however pronounced dead on arrival.

He said police investigations on the body revealed fresh wounds on both knees.

There has been a public condemnation of how recruits are welcomed to the CEPS Academy with drills following the outdooring of the video.