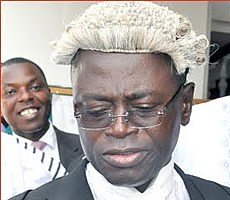 A private legal practitioner is proposing a 50-year jail term for culprits of vigilantism, arguing that the suggested 25year maximum term in the proposed bill is too lenient and “romantic.”

Yoni Kulendi said in response those criticising the bill on grounds of human rights, “there can be no human rights, no liberties and no constitution if this country catches fire and we are in a state of civil violence and crisis.”

He said this on MultiTV/Joy FM’s news analysis programme Newsfile on Saturday in response to a comment by a colleague lawyer, Martin Kpebu on the Vigilantism bill currently before Parliament.

Kpebu had said provisions in the new bill which punishes a person for failing to notify the Minister for Justice and Attorney General after disbanding militias loyal to him is “draconian.”

According to him, he speaks from an informed position when he says that the punishment imposed on vigilantes should not be viewed from a human rights point of view but rather from the danger the menace portends for the State.

“We see a clear present and imminent danger in these young men who are organising around vigilante. Vigilantism warrants a 50-year maximum sentence. The sentence must speak to the abhorrence and disapproval of the country as a whole,” he said.

The January 2019 by-election in Ayawaso which was marred by violence set in motion series of executive actions which were meant to put to rest, political violence.

The Emile Short Commission tasked to investigate the violence has submitted its report to the president.

Equally, the two leading political parties, the NDC and NPP, are currently in a conference being moderated by the National Peace Council to voluntarily disband party vigilante groups loyal to them following a directive by the president.

The Bill before Parliament is perhaps the final push to completely bury political vigilantism.

“Is there mischief confronting our national stability and the peace of our nation? There is imminent mischief, there is an imminent danger in this vigilante groups,” he said.

Pointing to violent agitations currently pervading across Africa and recent civil unrest in parts of the country by political activists, he said the phenomenon is a growing danger, which has the potential to erode the country’s democratic gains if not nipped in the bud.

“If democracy fails can anyone imagine where we are all headed? The human rights sentiments, we are all in it together but if this state fails where will we all be? These vigilantes must be a blackout, ” he blurted out.