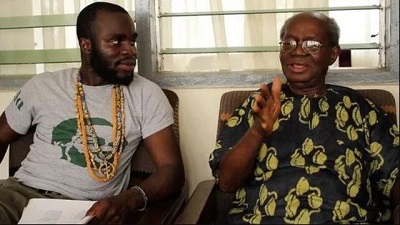 Popular Ghanaian rapper, M.anifest has disclosed that he has been tasked with writing the obituary for his celebrated grandfather Emeritus Professor Joseph Hanson Kwabena Nketia.

He will be given a state burial on Saturday, May 4, preceded by a pre-burial service at the Forecourt of the State House.

M.anifest (known in real life as Kwame Ametepe Tsikata) in a post to his social media pages said he was thrilled with the opportunity, although he was unqualified to do the job.

In the last few days I have unraveled & woven together many missing pieces of my family history – on my mother’s side. All this made possible by my current job as my Grandpa’s obituary writer. A job I’m absolutely unqualified for

He posted: “In the last few days I have unraveled & woven together many missing pieces of my family history – on my mother’s side. All this made possible by my current job as my Grandpa’s obituary writer. A job I’m absolutely unqualified for but e dey be to do it all the same 🤷🏿‍♂️✍🏿📜”.

Born on June 22, 1921, Prof Kwabena Nketia was a well-known ethnomusicologist and composer. 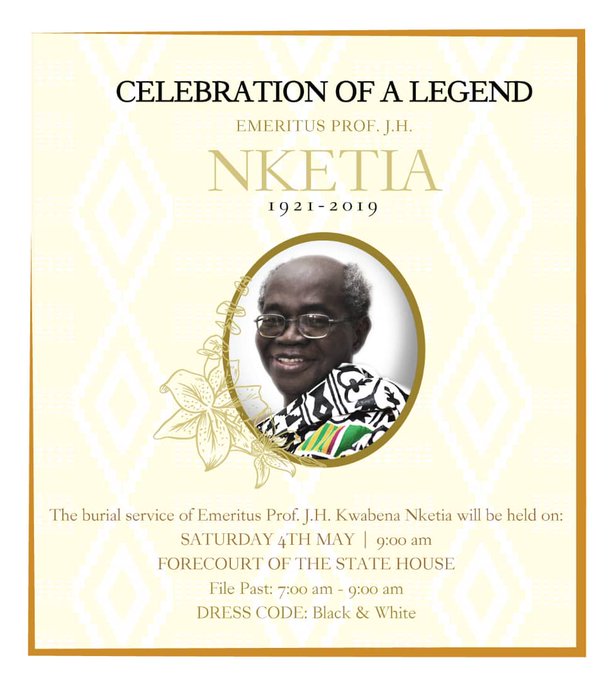 He was described as a “living legend” and “easily the most published and best-known authority on African music and aesthetics in the world”, with more than 200 publications and 80 musical compositions to his credit.

Born in 1921 in Mampong J. H. Kwabena Nketia was his parents’ only child.

On a government scholarship, he went to Britain at the age of 23 to attend the University of London from 1944 to 1949, beginning with two years of study in linguistics at the School of Oriental and African Studies.

In 1949 he began three years’ study at Birkbeck College, University of London, and Trinity College of Music, London, obtaining a B.A. degree.

In 1958 a Rockefeller Fellowship allowed him to go to the United States, where he attended Columbia University (studying with Henry Cowell), the Juilliard School, and Northwestern University, studying musicology and composition.

He was a professor of music at the University of Ghana, Legon, Accra, where he began teaching in 1952. He directed the International Centre for African Music and Dance (ICAMD).

He introduced, for example, the use of the more readable 6/8 time signature in his compositions as an alternative to the use of duple (2/4) time with triplets that was used earlier by his mentor, Ephraim Amu.

Although this practice undermined Amu’s theory of a constant basic pulse in African music and generated debate, Nketia pointed out that the constant use of triplets in a duple time signature was misleading.

Many scholars nowadays have found his theory useful in transcribing African music.

He has composed for both Western and African instruments and has written more than 200 publications, including his world-acclaimed The Music of Africa, which has been translated into German, Italian, Chinese, and Japanese.

Nketia has been honoured with many awards in Ghana, including the Companion of the Order of the Star of Ghana, the Grand Medal of the Government of Ghana (Civil Division), a DLitt (Honoris Causa) of the University of Ghana, the Ghana Book Award, ECRAG Special Honour Award (1987), Ghana Gospel Music Special Award (2003), and the ACRAG Flagstar Award (1993). He is a Member of Honour of the International Music Council.

In 2009, the Nketia Music Foundation was formed “to promote the conservation and development of Ghana’s Creative Legacy in contemporary contexts, and the use of the works of Emeritus Prof. J. H. Kwabena Nketia and other composers for the development and growth of music and culture”.

On 27 February 2012, Goucher College presented “Tradition, Creation, and Life: A Celebration of Professor Joseph Hanson Kwabena Nketia and the Music of Ghana”.

In June 2015, in commemoration of his 94th birthday, the Governing Council of the African University College of Communications (AUCC) held the official launch of the Kwabena Nketia Centre for Africana Studies.

Following his 96th birthday, a festival was held in celebration of his life and achievements at the Kwabena Nketia Centre for Africana Studies at the African University College of Communications, Adabraka-Accra, under the patronage of Ghana’s President Nana Addo Dankwa Akufo-Addo, who paid tribute to Nketia as “one of the legends of the ages”.

The Asantehene Osei Tutu II, in a speech read on his behalf at the festival on 27 September 2017, said: “Emeritus Prof. Nketia’s life symbolises the evolution of our nation in the 20th century. There are many parallels in his life’s story, which mirrors the national endeavours in the country. A bridge between our indigenous culture and modern culture, non-literate and literate traditions, old and young artists, Ghana and Africa in the dissemination.”

• 2016 – Reinstating traditional music in contemporary contexts: reminiscences of a nonagenarian’s lifelong encounters with the musical traditions of Africa.