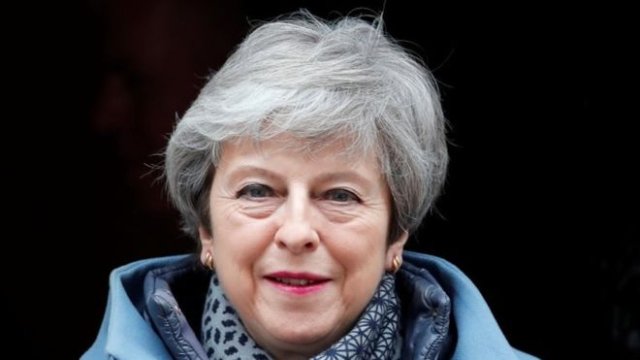 Theresa May has promised Tory MPs she will quit if they back her Brexit deal.

She told backbench Tories: “I am prepared to leave this job earlier than I intended in order to do what is right for our country and our party.”

The PM said she knew that Tory MPs did not want her to lead the next phase of Brexit negotiations “and I won’t stand in the way of that”.

Boris Johnson has said he will now back the prime minister’s deal, the BBC’s Laura Kuenssberg said.

But the Democratic Unionist Party said they would not be dropping their opposition to it, party sources told the BBC’s Northern Ireland political editor Mark Devenport.

“Prime ministers come and go” but the trade and constitutional issues affected by Mrs May’s withdrawal agreement would “live on”, DUP sources said.

Christopher Stalford, a DUP member of the Northern Ireland Assembly, tweeted: “I have no sympathy whatever for the prime minister and I hope her deal still gets binned.”

Mrs May did not name a departure date at a packed meeting of the 1922 committee of backbench Conservative MPs.

But Laura Kuenssberg said a Tory leadership contest could be expected in May.

Downing Street said it would be a “different ball game” if the deal was not passed by Parliament.

It comes as MPs seize control of the Commons agenda to hold votes on alternatives to the deal.

Mrs May told the 300 or so Tory MPs at the meeting “we need to get the deal through and deliver Brexit”.

“I ask everyone in this room to back the deal so we can complete our historic duty – to deliver on the decision of the British people and leave the European Union with a smooth and orderly exit.” 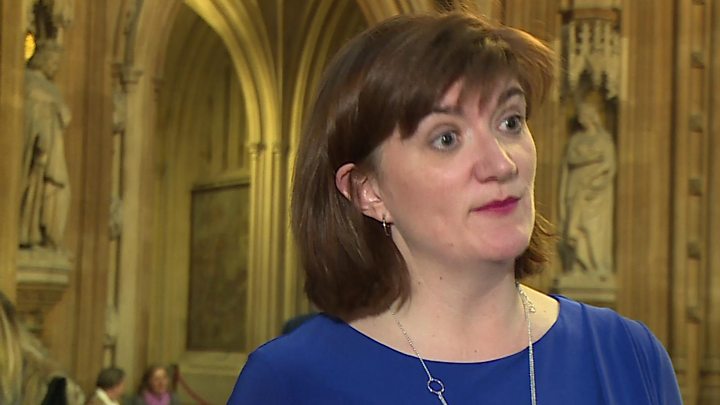 Nicky Morgan says some MPs were “saying they weren’t going vote for the agreement unless the PM indicated she was moving on.”

The BBC’s Iain Watson said a very senior Conservative had said the PM was “as clear as she has ever been” that she will not be around for the next stage of Brexit but if the deal does not pass then “that’s a different matter”.

Iain Watson said Mr Johnson – who is likely to be a leadership contender – was smiling as he left the meeting.

Labour leader Jeremy Corbyn tweeted that Mrs May’s announcement “shows once and for all that her chaotic Brexit negotiations have been about party management, not principles or the public interest”.

He added: “A change of government can’t be a Tory stitch-up, the people must decide.”

George Freeman, the prime minister’s former policy adviser, said she had done the “right thing” in announcing her decision to stand down, even though it had been a “sad moment”.

The Tory MP told BBC News her speech had been followed by a series of interventions from “very hardline Brexiteers” all saying “prime minister, thank you, I will now vote for this deal”.

The PM has said she wants to bring the deal back to the Commons this week, after it was previously rejected twice, by large margins.

Commons Speaker John Bercow ruled last week that the government could not return for a third attempt, unless there had been “substantial” changes to the proposals.

And he warned ministers earlier that they should “not seek to circumvent my ruling” by introducing procedures that could reverse his judgement.

But a Downing Street spokesman said there had been a “significant development” at the summit in Brussels last week, after Mrs May agreed “extra reassurances” over the Irish backstop with the EU, and the date of exit had changed.

Many Tory Brexiteers are looking to the Democratic Unionist Party, who have led opposition to the PM’s deal, before deciding whether to get behind it.

Leading Tory Brexiteer Jacob Rees-Mogg said there was an “element of sadness” about the prime minister’s announcement “even though it’s something I’ve wanted”.

And speaking to journalists after the 1922 committee he said he would vote for the government’s Brexit deal if the DUP abstained.

Asked what would happen if the government’s deal failed to get through, Mr Rees-Mogg said: “Then she would have every right to carry on.”

He refused to speculate on who would now stand as Conservative leader – but asked what he thought of Boris Johnson he said: “I think Mr Johnson is a formidably able man and I backed him in 2016.”

But the prime minister herself, along with her Cabinet ministers, will abstain in the votes, Conservative whips have indicated.