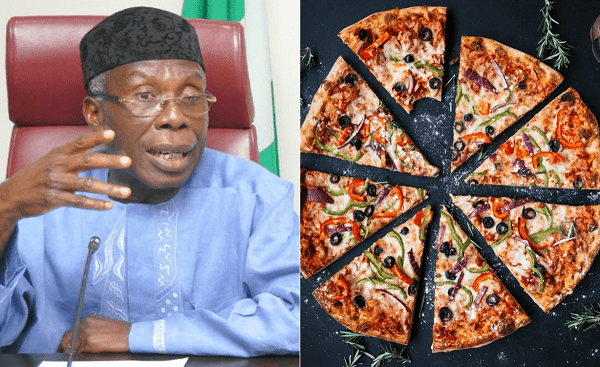 People in Nigeria are using British Airways to ‘deliver’ them pizzas from London, the nation’s Minister of Agriculture has complained.

Audu Ogbeh, 71, said that Nigerians are ‘using their cellphones to import pizza from London’ as he addressed the Senate Committee on Agriculture in Abuja.

Describing it as ‘annoying’, he expressed concern over the country’s importation of goods exceeding the exportation.

They buy in London, they bring it on British Airways in the morning to pick up at the airport,’ he said. ‘It is a very annoying situation and we have to move a lot faster in cutting down some of these things.’

The Nigerian government is currently trying to curb the importation of goods, which they say is too high and damaging the country.

‘Meanwhile, a basket of tomatoes is less than n2,000. The farmers are losing money because the processors do not have enough funds to set up factories.

‘Two factories have started off. I am sure by the end of next year we can comfortably tell the importers of tomato paste to stop.’

Social media users have since taken to Twitter to react to the idea of people ordering pizza 4,000 miles away from London.

‘Dear @British_Airways, how come you didn’t tell us you run a pizza delivery service to Nigeria? Is there an app for this?’ one person joked.

Another asked: ‘What’s the crime there? Doesn’t the same BA flight return to London with fresh vegetables from Anambra? If people like UK pizzas what’s wrong with that?’