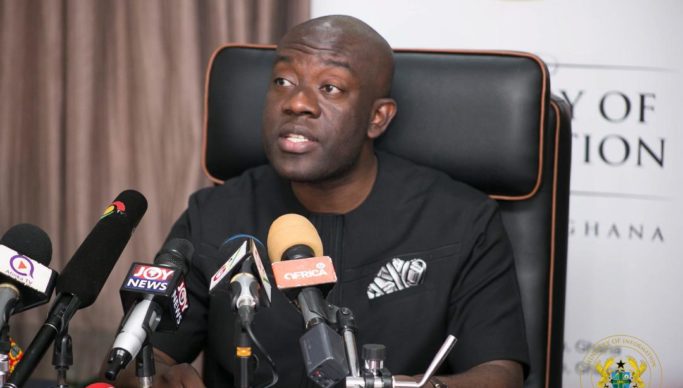 Information Minister, Kojo Oppong Nkrumah, is not enthused about the North Tongu MP, Samuel Okudzeto Ablakwa’s decision to go public with his request for updates on the Gitmo 2 ex-detainees in the country.

According to the minister, Ablakwa sidestepped due processes in putting out an open letter to demand updates on the two persons: Mahmud Umar Muhammed Bin Atef and Khalid Muhammad Al-Dhuby.

Samuel Okudzeto Ablakwa, who is also the Minority Spokesperson on Foreign Affairs on Thursday wrote an open letter to the National Security Minister demanding updates on the two ex-Guantanamo Bay detainees in the country.

Ablakwa said the government several months ago had given indications that it was in touch with other countries to have the two persons relocated.

“Respectfully, it is my considered view that after a full year of patiently waiting on Government, it is imperative that in this matter which is of enormous national interest, you provide an update to the Ghanaian people as Good Governance principles of transparency and accountability will demand.

“It is my humble expectation that you will now provide the update requested with dispatch,” Ablakwa said.

But according to Kojo Oppong Nkrumah, using the forum of parliament to get matters addressed is more appropriate than resorting to media controversies.

“They mentioned that we are at the stage where we are engaging with other countries to determine whether or not they will make them available to other countries. If he goes through the processes, file the necessary questions in parliament, gets the necessary persons to attend to them, those answers will be made available,” he said.

Meanwhile, Samuel Okudzeto Ablakwa is threatening legal action against the National Security Minister, Kan Dapaah, should the minister fail to provide the house with a full report on the security and intelligence situation in the country, 20-days after the parliament resumes from recess.

According to him, the National Security Minister, Albert Kan Dapaah, has flouted the Security and Intelligence Agencies Act 1996 with impunity, since assuming office by refusing to send the requisite annual report on intelligence agencies to Parliament.