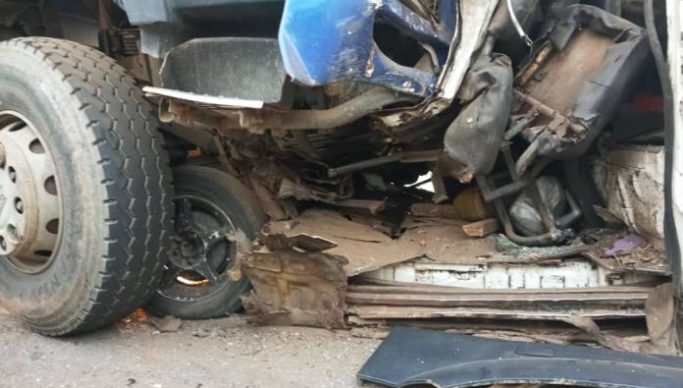 A commercial driver and his mate are in critical condition at Winneba Trauma and Specialist Hospital in the Central region after a tipper truck run into their car.

According to reports, the driver of the tipper truck with registration number GN 7381-18 on top speed tried to overtake the commercial vehicle when the accident occurred.

The accident happened at round 6:30 am Sunday at Gomoa Biakoye on the Kasoa Cape Coast Highway in the Central region.

A taxi driver, Yaw Boadi who witnessed the accident told Adom News he was in front of the tipper truck but decided to give the driver way due to the speed with which he was driving.

He noted that, the tipper truck which was behind the trotro vehicle lost control and run over it, destroying it beyond repairs.

“Immediately I gave him way, he run into the trotro and dragged it under a trailer carrying cement” he stated.

He said both cars were heading toward Winneba when the accident occurred.

Yaw Boadi noted that, in an attempt to escape the scene, the tipper truck driver collided head-on with an articulator truck loaded with cement.

He said the tipper truck driver is currently at large while the driver and his mate remain unconscious at the Trauma hospital.