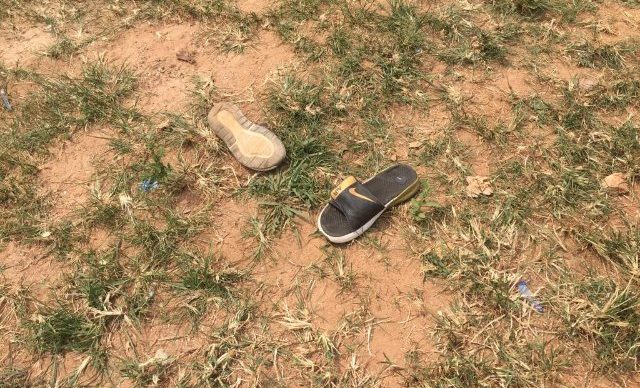 Two persons have been shot at the Ashanti Regional Office of the opposition National Democratic Congress (NDC).

The incident happened during an altercation between at least one of the victim and the shooter.

According to an eye witness, the assailant, associated with an NDC militia, the Hawks, shot an NDC man thrice. First in the leg while he run and twice in the chest at close range as he lay vulnerable.

The man whose identity is yet to be confirmed was rushed to the Komfo Anokye Teaching hospital but has died. A statement from the party has confirmed the shooting and the death.

One more person was also shot and is in critical condition, Luv FM’s Erastus Asare Donkor has reported.

General Secretary of the party, Johnson Asiedu Nketia, among other bigwigs narrowly escaped unhurt. It is unclear what may have started the commotion leading to the shooting.

Photo: Blood splattered on the grounds during an NDC meeting in the region

The statement signed by the NDC Ashanti regional secretary Kwame Zu said some men on Motorbike wielding guns attacked a gathering outside, short indiscriminately and sped off.

The regional secretary declined to confirm if the shooter is affiliated to the party’s vigilante group outdoored in September 2018.

Photo: The Hawks is a pro-NDC militia stormed the venue of the party’s regional elections last September in black t-shirts with the inscription “The Hawks” written behind it.

He described the incident unfortunate and offered condolences to family of the bereaved. Kwame Zu said the party is holding a crisis meeting over the shooting.

The incident is expected to increase public concern about public insecurity fostered by activities of vigilante groups.

Former Deputy Ashanti regional minister under the NDC administration, Joseph Yamin has said the members of the hawks are not as disruptive as members of the vigilante groups in the NPP.

“…We are going to use them for the good of the party and the country,” he said.