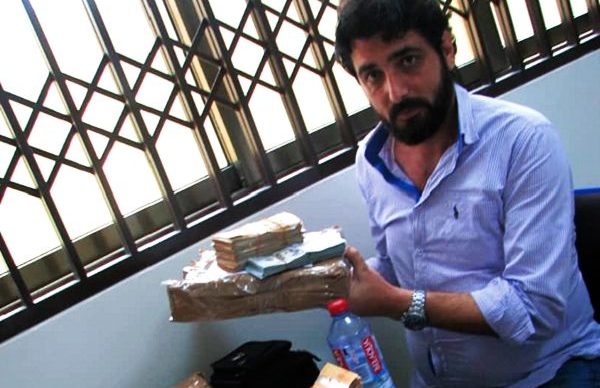 Operatives of the Narcotics Control Board (NACOB) at the Kotoka International Airport (KIA) have busted a member of a money laundering syndicate in the country.

The suspect, Darwich Hussein, 38, a Lebanese, who was travelling to Beirut, Lebanon, was arrested with $1.4 million and 256,000 euros in his carry-on bag at the KIA in Accra last Monday.

According to the Executive Secretary of the Narcotics Control Board, Mr Francis Torkonoo, the suspect was arrested while going through departure formalities at the KIA.

Upon reaching the NACOB check point, it was realised that Hussein was in a hurry to board the plane with a large carry-on bag, thus arousing the suspicion of the security operatives who demanded to conduct a search on him.

Mr Torkonoo said when the carry-on bag was opened, it contained some neatly parcelled items covered with three T-shirts.

And when the parcels were subsequently unwrapped, the officers found bundles of dollar and euro bills.

Hussein was, therefore, arrested and taken to the NACOB Headquarters where the money, totalling $1.4 million and 256, 000 euros, was counted.

According to Mr Torkonoo, there was no evidence that the money was declared at the Customs Division of the Ghana Revenue Authority (GRA).

The suspect told investigators that the money belonged to him and that he was the Managing Director of Lamo Industries Limited, fabricators of aluminium profiles and metal forging, which was registered in Ghana in 2013.

He said the company was located at Block G of the Asokwa Industrial Area in Kumasi, but when probed further, he changed the narrative by claiming that the company had collapsed for which reason he decided to sell all his assets and take the money back to his country, Lebanon.

The suspect also alleged that after the company was liquidated, he was employed at R. C. Rema Company Limited where salaries paid to him accumulated to the tune of $1.4 million.

When pressed further, Husein mentioned the name of another Lebanese as the one who gave him the money to be delivered to his business partners in Lebanon.

The NACOB executive secretary said activities by money launderers could be a contributory factor to the recurrent depreciation of the Ghanaian currency and, therefore, reminded businesses and the travelling public that anybody with such large sums of foreign currency had to declare them at the airport.

He said based on activities of money launderers in the country, security agencies had intensified their surveillance on them.

Mr Torkonoo said the suspect would be put before court after investigations.