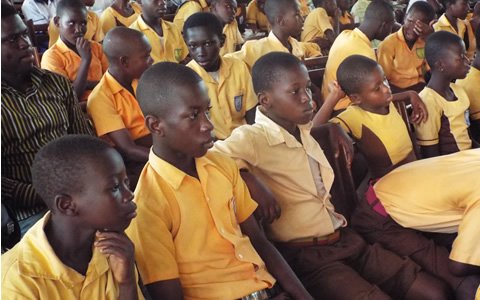 Heads of some basic schools in Cape Coast, the Central Region capital, have appealed to the government to expand infrastructure for schools to create space for effective academic work.

They said severe congestion in classrooms and dilapidated structures were a huge bother that affected not only the quality of teaching and learning but the health of the students.

The Heads made the appeal during separate donations of about 10,000 exercise books and supplementary reading materials by the Cape Coast Youth Development Association (CCYDA) to some selected schools in the Metropolis.

The Headteachers explained that apart from the enormous pressure on the limited structures, there were also the absence of well-stocked science laboratories, libraries, Information and Communication Technology (ICT) centres, textbooks, supplementary reading books, feeding, and other Teaching and Learning Materials (TLMs).

They identified encroachments, religious activities on school compounds, the proximity of schools to the sea, highways or major roads, markets, and general insecurity in schools as a great setback to their vision to deliver their best.

According to them, though ICT played an integral role in the modernised world, the schools were challenged with over 4000 student population using only about 100 computers.

At Wesley Girls basic school, Mrs Margret Akosua Evans, the Headteacher, lamented the lack of basic teaching and learning aids and appealed to corporate bodies, NGOs and philanthropists to support them with computers.

She said the school had chalked some successes in producing outstanding personalities who were playing useful roles towards the nation’s development.

Madam Leticia Saka, Headteacher of Philip Quarcoo Boys said although they were aware of the benefits of education, “It is sad to note that in Ghana, a number of children are not given the opportunity to have equal access to quality education”.

She complained about dilapidated school buildings with multiple cracks on the walls, cracked floors, ripped-up roofing and broken windows and residents in the area had turned the school into refuse dump-sites and a place of convenience as pupils were forced to sweep heaps of such nuisance before classes every day.

Most of the schools visited had aged structures and looked scarier than the one at Breman Jamera that collapsed killing six kindergarten children sometime last year.

In some of the schools, the classrooms had no proper ventilation and light, therefore impairing the sight of the pupils who also battle hot atmosphere with three using a dual desk.

Some Heads said the situation had resulted in pupils getting sick, affected enrolment, promoted absenteeism, truancy and lack of concentration in class.

Other Headteachers re-echoed the challenges and called for help from all stakeholders while urging parents to see their children’s educational needs as equally important and provide their needs.