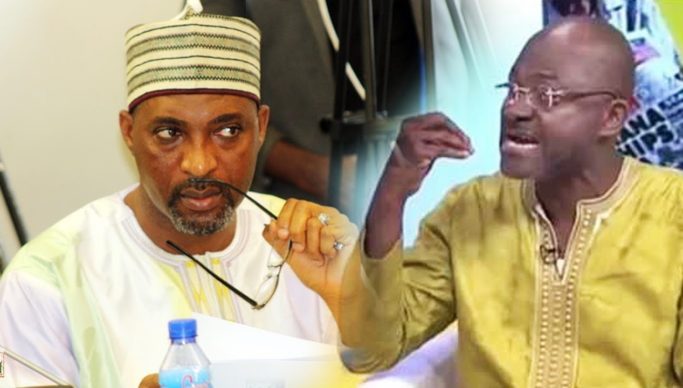 According to the Asawase MP, he will push for this sanction when he appears before the Privileges Committee to make a case of contempt of parliament against his colleague.

This follows a near fisticuffs between the two legislators on the Floor of the House on Wednesday, over a matter referred to the Privileges Committee.

The open confrontation follows the latest case brought before the Privileges Committee of by the Asawase MP against Kennedy Agyapong, over comments he made months before the killing of Tiger Eye P.I investigator, Ahmed Suale.

But speaking to Citi News, Muntaka Mubarak aid his colleague parliamentarian needs to be dealt with accordingly.

The visibly exasperated lawmakers freely insulted each other as they were prevented by other members from getting close to each other.

Kennedy was really angry and had some unprintable words for Muntaka Mubarak because he is pursuing a case against him.

In the video, he (Ken Agyapong) told his parliamentary colleague that he would deal with him, which got the response, “I’m ready for you”.

After this exchange, Ken asked why Muntaka was fired when he got a ministerial position, after which some parliamentarians pulled him out of the chamber.

Agyapong noted to be hot-tempered had a similar confrontation with Ningo-Prampram MP, Sam George in September 2018, during the heat of the Digital Terrestrial Television (DTT) project controversy.

The Speaker of Parliament on Tuesday referred a case of contempt of Parliament brought against Ken Agyapong by Muntaka Mubarak to the Privileges Committee of the House.

Muntaka Mubarak, called on the Speaker to refer the member to the Privileges Committee for comments he allegedly made regarding the slain Tiger Eye investigator, Ahmed Suale, months before his death.

This was after the Minority at a news conference asked the police to arrest the Assin Central MP as a key suspect in the matter.

Ahmed was allegedly killed in broad daylight by two men on a motorbike, while he was leaving home late on January 16, 2019, at Madina, a suburb of Accra.

Kennedy Agyapong has come under fire for allegedly inciting violence against Suale during the heat of the Number 12 exposé which exposed deep corruption in Ghana football.

But Kennedy Agyapong has insisted that he has nothing to do with the journalist’s death.

This is the second time Kennedy Agyapong has been dragged to the committee in recent times over comments deemed harmful to the reputation of Parliament.

Majority Leader, Osei Kyei Mensah-Bonsu on his part, did not object to the call for the matter to be referred to the Privileges Committee.

Ahmed Suale was reportedly shot twice in the chest and once in the neck by two gunmen on a motorbike at Madina, killing him instantly.

The Criminal Investigations Department (CID) has subsequently interrogated some persons; including the Member of Parliament for Assin Central, Kennedy Agyapong, and former GFA president, Kwesi Nyantakyi.