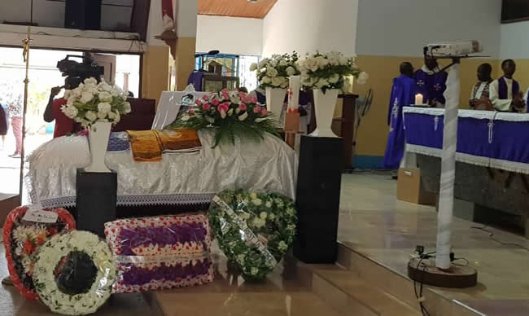 The slain Marketing and Public Relations Manager of the Tema Port, Ghana Ports and Harbours Authority (GPHA), Mrs Josephine Asante, has been laid to rest.

Her funeral service held at Our Lady of Mercy Catholic Church in Tema.

Mrs. Josephine Asante, 49 years, was murdered at her residence at Emef Estate at Mataheko near Michel Camp after returning from a staff end of year dinner on the dawn of 13th January 2019.

Her househelp and driver were subsequently arrested as prime suspects and put on provisional murder charges in on-going court committal proceedings.

Right Reverend Father, George Obeng Appah, Parish Priest of St. Thomas More and John Fisher Catholic Church, Achimota, in a sermon, said the souls of those who led a just life were in the hands of God.

He regretted that, some Christians appear to have sold their conscience for money; a situation he said had caused the nation to lose its value.

He, therefore, called on Christians to be bold and criticise politicians and any wrongdoing irrespective of those involved.

Father Appah noted that Mrs Asante stood for what was right hence her gruesome elimination from the earth stressing that ‘If you want to live right and truthful you would be killed’, he added.

He prayed for forgiveness for her murderer(s) while cautioning that greed, jealousy, and backbiting must not be encouraged among Ghanaians.

Mr. Michael Luguje, Director General, GPHA, speaking to the media on the sidelines of the funeral, revealed that Mrs Asante had a cordial relation with all employees and clients.

Mr Luguje noted that the vacuum created by the demise of Mrs Josephine Asante would be very difficult to fill.

He also called on the security agencies to work hard to bring the perpetrators of the crime to book.