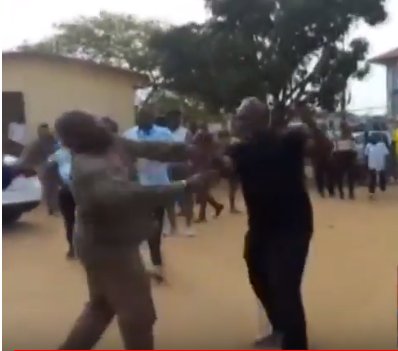 The Director of Operation at National Security has described as doctored, videos showing violent scenes during the bloody Ayawaso-West Wuogon by-election in Accra.

Colonel Michael Opoku claimed, the video shown to him by the Commission of Inquiry investigating the violence “does not follow the sequence of events”.

The damning video evidence shows an unbridled assault on civilians by masked men as the police appeared hapless in controlling the situation at one of the La Bawaleshie polling stations.

But questioning the authenticity of the video shown to him, the Director of Operations said;

”If anybody gets the first-day video, you will see that this one is a doctored video….the Immigration officer that we saw moving away, moved when Sam George was being slapped.

“You could see that he was moving away because he didn’t want to be an eyewitness to whatever was happening. But in the video now, you are seeing a different thing, with a different narration,” e said.

In another example to support his doctoring claims, he pointed to a narration in the video attributed to a supposed National Security operatives who said “we will kill you, we will kill you. This is the beginning of 2020 [elections].”

But disputing the narration, Col. Michael Opoku said the statement was made by “the people who were with Sam George”.

He said although the people uttering these threats were dressed in Khaki trousers with black outfits similar to his operatives, he could nonetheless identify his men.

The Director at National Security cautioned the media to be careful in putting patches of videos together.

He said in the first video he watched, a Joy FM reporter said two people had died. Joy FM has however confirmed none of its reporters made this claim.

According to some Facebook posts, some of these operatives are known members of an infamous NPP militia group Invincible Forces.

The Colonel while disputing the authenticity of the video said he would have to check to find the original video of the violence.