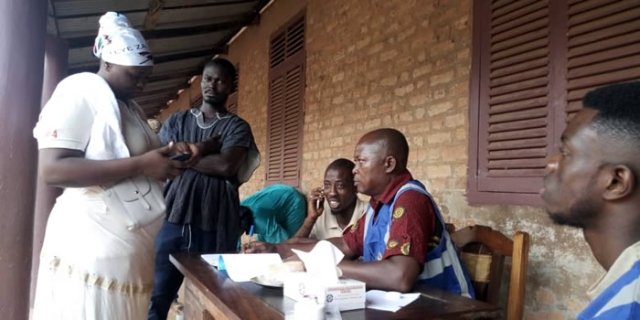 NDC delegates at the Assin South constituency taking part in Saturday’s presidential primaries are angry over GHS10 that was given to them as the allowance for food and transportation by the party’s executives in the constituency.

Adom News reporter, Alfred Amoh reports that angry delegates who are mostly farmers have said they would have been better off going to their farms than taking part in the polls.

They say the GHS10 was meagre.

“Assin South is a farming community and today being a Saturday, we could have made more than GHS10 from selling our products from the market. We have come to endorse a particular candidate so why do we have to waste money to get here and be given this amount of money for food and transportation,” an angry delegate said.

About 983 delegates from 105 branches are expected to vote in the constituency.

In Eastern Region, former Minister of Communication, Dr Edward Omane Boamah was among some 700 delegates who cast their vote at New Juaben North constituency.

“The voting process has been peaceful since it started at 7 am,” reports Eastern Region Correspondent, Kofi Siaw.

Speaking to journalists after casting his vote, Dr Omane Boamah was confident his former boss, John Mahama will emerge victorious, explaining his victory will rejuvenate the party’s base ahead of the 2020 polls.

At Kwesimintsim constituency in the Western Region, a total of 577 delegates are expected to vote as at 9 am, 60 delegates have cast their ballots, reports Ina-Thalia Quansah.

“There was the issue of some people’s names appearing twice but they have been told to hold on for further direction before they are allowed to vote,” Ina-Thalia reports, Saturday.

Meanwhile, former President John Mahama has cast his ballot in Bole, in the newSavanah Region.

Prof Joshua Alabi has also cast his vote at Krowor, in the Greater Accra Region. When he arrived at the polling station Saturday morning, a search through the register revealed his name was absent. After waiting for more than 20 minutes, EC officials contacted party executives who eventually gave the green light that his name should be included in the register before he was allowed to vote.

He told Joy News’ Joseph Opoku Gakpo that from what he can observe and has been told, the process has been largely smooth.

In the Northern Region, Regional Chairman of the NDC Alhaji Ibrahim Mobila, has said the level of enthusiasm demonstrated by delegates of the party in today’s primaries to elect a flagbearer is a clear demonstration of the party’s readiness to win power in 2020.

Alhaji Mobila made the comment when he went on a tour of polling stations in Tamale North constituency to monitor the exercise.

Ghana’s largest opposition party, the National Democratic Congress is set to elect its 2020 flagbearer as it attempts to cut short its stay in opposition since 2017.

And it is seeking to find one out of seven candidates whom they believe will hold the most convincing sway over voters come the 2020 general elections.

The party is using the most exhaustive electoral process ever seen in any political party with nearly 280,000 delegates across all 275 constituencies expected to cast their ballot.

But all eyes will also be on the party’s ability to pull this off without lamentable hitches and in recent times, without the involvement of party militias.

After a supporter was shot dead in the Ashanti region last Monday, allegedly by a member of the pro-NDC militia, ‘The Hawks’, there is palpable national resentment about the destabilising influence of party militias in a democratic state.

In response, the NDC has stressed it is fully relying on a distrusted police service, giving the highly criticised security agency an image redemption opportunity.

Myjoyonline.com is bringing you up-to-date coverage of the national exercise. Keeprefereshing…