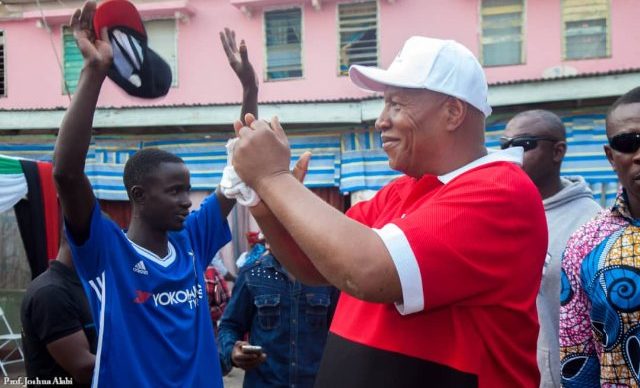 Presidential hopeful of the National Democratic Congress (NDC), Professor Joshua Alabi has promised to beef up his 2020 campaign with the re-introduction and active involvement of founder of the party, Jerry John Rawlings.

Prof Alabi expressed his commitment to getting the NDC founder back to the hurly burly of political campaigns, describing that move as one of the cornerstones he will lay towards winning the 2020 elections for the party.

“Let me assure you, my brothers and sisters, next year by now, I will come back here to campaign; and on that day, you will see your father, your son, uncle and your brother J.J. Rawlings. He will be here with me; to fire you up towards the elections,” he told NDC branch executives in the Volta Region, this week.

The professor had been campaigning in the Volta Region to solicit for votes, ahead of the NDC Presidential primaries coming off this weekend.

Assuring the NDC members on his plans to unite the party as the flag bearer, Prof Alabi promised to get his competitor the former President, John Dramani Mahama, to also lead another leg of the 2020 campaign, alongside getting all the other leading members of the party to campaign.

The NDC in 2016 suffered its worse political defeat, when under the leadership of President Mahama, they recorded 44.4% in the national polls. Some researchers in the NDC have blamed former President Rawlings for abandoning the NDC 2016 campaign, hence the defeat.

The founding father of the NDC has stayed away from aggressive campaigning activities of the party as a result of differences he has had with the conduct of business within the party. He has on many occasions chastised his party leadership, publicly, expressing his unhappiness, much to the discomfort of the party leadership.

In response to his occasional public outbursts, some leading members of the party, who are close allies of the former President Mahama, have also attacked the founding father and questioned his integrity and suitability in in the current political dispensation.

The general consensus within the party however points to the fact that the founding father is loved by a huge population within the party who crave for his return to campaign activities of the party.

Wrapping up his tour in the NDC stronghold region, the Professor promised to honor the region with developments to reciprocate for consistently voting the party into government.

Flanked by some elders of party in the region including the 84 year old former diplomat, Ambassador James Victor Gbeho and the longest serving Deputy Speaker of Parliament, Keneth Dzirasah, the Professor mentioned the Eastern Corridor road and other delayed projects in the region, as necessary for the development of the region and added that they will be his priority, when elected as President.